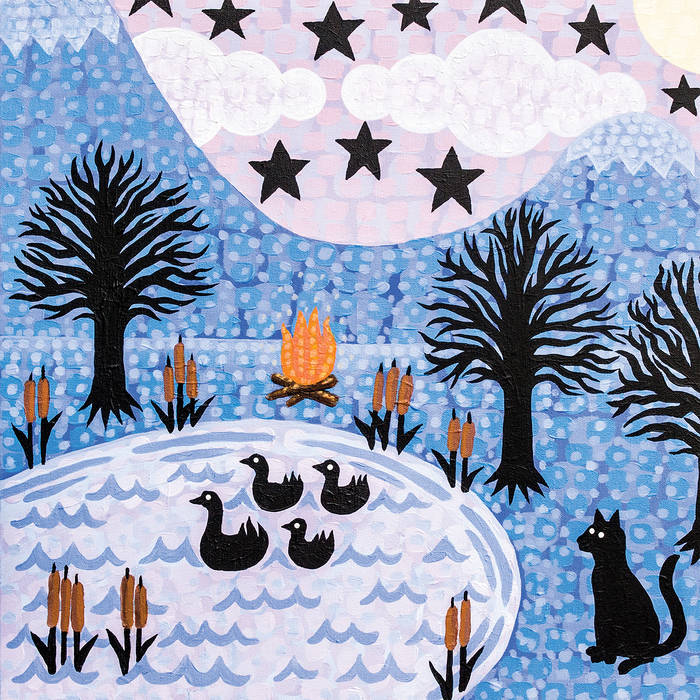 North Carolina-native Jenks Miller is a bit too otherworldly to ever be pegged as a regional musician. Still, he seems to have the South in his bones. Not the false sheen associated with the so-called “new South,” mind you—with its tech startups and gallery spaces colonizing the re-purposed red brick warehouses; the hip speakeasies and fussy artisanal coffeehouses dotting the once somnolent and segregated main streets; the hikers and bikers streaming over the muddy tobacco roads. Not that place, which Miller might tell you, is being built on less than solid ground. The Carolina beneath it and beyond it. The primordial South.

Still, Miller is hard to avoid in the cultural hotbed of the NC Triangle music scene. In addition to playing guitar in the beloved local rust rock unit, Mount Moriah, Miller has released a run of spidery electric guitar soli records under his own name. And for the last decade, he has helmed the experimental Horseback, whose humid, heavy drones conjure like nothing else the suffocating, insect hum of the warm southern night. In recent years, he’s been playing out with his purgatorial jam outfit, Rose Cross NC—an exercise, as their vaguely alchemical name indicates, in the swamp psychedelia of the Southern occult. (A handful of Rose Cross’s performances—improbably mapping the strange space between the two Deads: Grateful Dead and Dead C—are available at Jenks’s Bandcamp page, including their killer Hopscotch 2015 entry, one of the festival’s absolute highlights.)

Blues from WHAT is the first recording under the Rose Cross NC moniker to capture the searing sound of the touring band’s labyrinthine live performances. (Last year’s dreamy cassette EP, Music for Snowdrifts, was a worthy, but altogether more gossamer affair.) This is somewhat ironic, as Blues is essentially a solo album. Aside from Rose Cross keyboardist Elysse Miller’s welcome shadings on the Grendel Drone Commander throughout the affair, Blues from WHAT still mostly finds Jenks Miller conjuring alone. One wouldn’t necessarily know it, though. The proceedings are as densely tangled as anything in their live set.

Blues from WHAT’s tremulous opening track, “Reaching Never Reaching” intertwines feedback and keening recorder and church organ in an ever-rising salutation. This bright ascent is cut short by the seamless transition into the astonishing “Yellowtail (Blues from WHAT)”: the drums storm in, and Miller lets loose with a snarling guitar line. The heavenly organ falls in line behind the riff while pentecostal tambourines rattle with the rite. Miller intones plagues and portents from afar: "Black blood! Boiling mud! Crawling lava!/ Now you see. Now you see.” The music fractures. “And I feel the spirit come . . .” over and over, in some consummation of revival. The track that follows, “From Nothing to WHAT” is a lumbering electric processional, snaking its way deeper and deeper into the metaphysical backcountry. “I know this place./ I feel it./Past not even past”—a scrap of Faulkner in the lyrics, in case one has forgotten just where we are.

On the far side of this ordeal lies the radiant raga-like introspection ‘Scrying in Water,’ which comprises the entire second half of Blues from WHAT. Scrying, of course, is the art of divination by crystal. And here Miller gazes into the “rings on rings” of the rippling water, while guitar, organ, and the breathing tambura proceed outward in an endless Terry Riley-esque burble. “Half light, patient waiting/ Half light meditation” sings Miller, on the cusp of some imminent illumination. We are not vouchsafed the content of his vision.

If this feels like an initiation into some great mystery, perhaps it is. Rose Cross, after all, derives its name from a lineage of semi-mythical secret societies dating back to the Middle Ages. And, indeed, when prompted, Jenks Miller will happily unravel the various threads of esoterica woven into his music. But what makes Miller’s musical oeuvre so extraordinary (and he is right to warn us against ascribing distinct aesthetic and spiritual programs to his variously named projects; they are all of a part) is the way he manages to keep his revelations rooted in the physical and sonic landscape of the American South. There is a lived-in, historic quality to Blues from WHAT that is absent from so much of the headspace abstraction of contemporary experimental music. This music feels like it is from somewhere. At times, it feels like it has always been there, waiting for us.